The most amazing milk-lady in the west 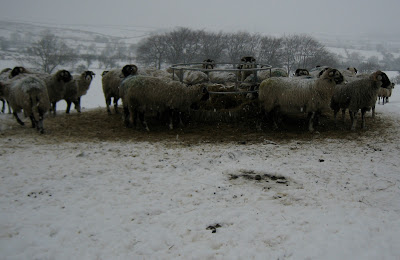 Our glamorous milk-lady, Bev is an amazing woman. Up to and including delivering your daily pint within hours, yes, hours of delivering her own baby daughter a few years back. She’s a really inspiring and energetic character and I love the stories she comes out with.

She recounted an amusing tale to me the other day.

She was snuggled up in front of a roaring fire one night during the recent bad weather of foot-deep snow, in her beautiful farmhouse nestled below Pendle Hill. But poor Bev was faced with a dilemma. Should she pour herself a large glass of medicinal whisky before she ventured out into the elements to feed her hungry flock of sheep? Or would it be foolhardy to risk such a warming luxury before undertaking such a rugged task? In the dark? In deep snow?

Of course, our sensible Bev took the only course of action that was the logical solution to this conundrum and poured herself a titanic tot of the amber nectar before embarking on her hazardous
mission.

‘Well,’ she said, ‘I had the sack of food on me shoulder and I walked through the field towards the flock. As I approached them, they spotted me and started running towards me. The first couple that arrived started jumpin’up before I could get the sack off me shoulders and another couple were wrigglin’ around me legs. Honestly, they could sense I was a bit squiffy. Anyway, they managed to knock me over and started tramplin’ on me legs and chest to get at the sack. By this time there were about 25 sheep in a frenzy around and on top of me and there was food and straw and sheep-poo everywhere, and I were covered from head to toe in it.’

Happily Bev managed to escape the woolly-backed bandits and high-tailed it safely back to the comfort of the roaring log fire. She deserved another drink after her ordeal in the field.

The next morning, very early and while on her milkround Bev heard on the radio, her favourite
insomniac DJ ask for listeners to ring in if they had experienced the consequences of a bad decision made while faced with a difficult dilemma.

And so on air, to her fellow early-hour risers, Bev began
‘...last night I made the wrong decision about whether I should ‘ave a drink of whisky before I fed the sheep, or after, well...’ she continued...